Once unlocked, each Hero in your collection may socket Iso-8 to boost specific hero stats like Attack or Defense, furthermore they can also be equipped on a Hero to unlock bonus SET abilities. 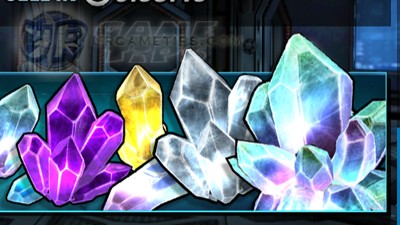 Sliver > Chip > Fragment > Shard
- This is the only way to increase the base stats and secondary stats of Iso-8 Crystals.
- Prioritize Tiers + Key Stats before anything else.
- Tip: An Iso-8 Crystal Fragment that has 3 or 4 Key Stats is better than an Iso-8 Crystal Chip that has 5 stats.

Determining Hero Base Stats
- The color of each Iso-8 Crystal is important, as each color corresponds to a primary hero stat.
Match the Tile Colors to Get Bonuses

- Matching the color of a Crystal to the color of the Hero slot provides +50% bonus to the relevant character stats as well. It is advisable to follow these color tiles because the bonuses are just too hard to ignore (note that Prismatic Iso-8 Crystals can be equipped into any Tile color).

What Are Fillers?
- In case you don't have any available Iso-8 Crystal that matches a Tile Color, you can put "Fillers", a temporary Iso-8 Crystal until you can get a better one.

- Prismatic Iso-8 Crystals always gives +50% bonus whichever Tile you equip it into, making it a nice example of a Filler Iso-8 Crystal, even better if the secondary stats included enhances your Hero's primary stats.
- You can also put any Iso-8 Crystals as Fillers.

What Will Happen If I Replace or Remove an Iso-8 Crystal?
- After paying the fee with Silver, the replaced or removed Iso-8 Crystal will go back to your Inventory, so don't hold back and equip them to your Heroes. Experiment and have fun!

How to Determine My Secondary Stats?
- If you don't have a clue, just follow the Tile Colors your heroes have.

- Example: Hawkeye's Tile Colors are Yellow, Silver, Red, and Purple. So aim for Accuracy, Speed, Attack, and Evasion as base and secondary stats for every Iso-8 Crystal. Other stats included can be any since it's random, or simply find the extra stat you like (probably Health).

- Another Example: Wasp's Iso-8 Crystal Tile Colors are Purple (Evasion), Silver (Speed), and Red (Attack). She has 3 primary stats that you should aim for every Iso-8 Crystal, the other 2 stats can be Accuracy, Health or Defense. Now, focus more into Accuracy if you want your attacks to hit, but it is also ok to focus on Health and/or Defense more if you want your Wasp to just tank and dish out buffs and debuffs. My point is, any extra stats will do as long that you have her primary stats, especially Evasion.

- Using Hawkeye's Iso-8 Tile Colors above as our example, let's say you don't like Evasion, and only want to focus on Accuracy, Speed, and Attack, then here's my advice:
- Do not equip a Purple Iso-8 Crystal into his Purple Tile, instead, insert a Prismatic Iso-8 Crystal with at least Accuracy, Speed, and Attack as secondary stats, it's better and will give you more stats that you need.

- Another Example: If you want Wasp to just focus more on dodging attacks, then put Prismatic Iso-8 Crystals with at least Evasion as secondary stat to all Tiles that is not Purple or only her Red Tile. Is it recommended? for PvE yes, to boost her Evasion and help you get through Heroic Stages. Add other secondary stats you might need together with Evasion, especially Speed (yup, Wasp still needs it).

- Slotting the required number of Crystals in an Iso-8 Set provides an additional set bonus.
- Some Sets will require 2 to 6 pieces to activate the Set bonus.

- Note: More Iso-8 Crystals can be unlocked as you unlock more Chapter Missions.

Should I Prioritize Stats over Sets?
- Yes, better aim for higher tier Iso-8 Crystals with more Stars and key Stats for your Hero, then make them a Set later on as a bonus. Move them around your Heroes, experiment and have fun.

How to Get More Iso-8 Crystals?

Which Iso-8 Crystals to Sell First?
- Probably the lowest Tiers that you no longer need, and the ones with only 1 or 2 Stars.

- The maximum amount you can carry in Inventory is 100.
- You can sell unneeded Iso-8 Crystals for Silver.