How to Reset the Game?
- In case you want to reset after your first test run through the game, here's how:
- Go to [Others] > [Settings] > Look for the [Log Out] option. Reset the game and use a new account or a guest account.
- If you want to play using your existing account, the only way for now is to choosen another server. 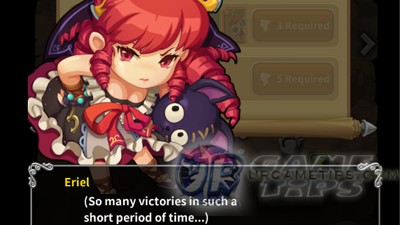 Once you are free to explore around, here's some early suggestions that you might want to do:

Claim your First Golden Hero
- [Achievements] Link Your Account if you are using a Guest Account, doing so will reward you a Hero Gacha Ticket. It's under [Others] > [Settings] > [Link Account] option.
- Claim the ticket from your inbox to get a nice 4*/5* hero.

Manage Team
- Try to squeeze in 3 Heroes including your new 4*/5* hero, any heroes will do. Why? because you still need to max out all heroes that you have regardless of their Rarity, to receive more free Gems from the [Achievements] menu > [Hero Collection] tab.
- Use or keep upgrading your 1st 3*/6* hero, also a useful hero early game once you can fit him/her in your team.
- At Summoner Lvl 5, the 4th team slot will be unlocked.

- Just by getting the hero the first time will net you an instant Gem, then maxing their Lvls and Awakenings (Golden to Purple Stars) will yield more Gems.

- Start with the heroes that are easy to max out, then continue and switch with the others. Note that this reward system will only trigger once per Hero, duplicates doesn't count so feel free to dismiss them. 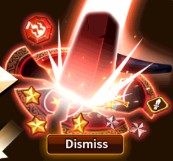 - You can get Coins and various materials through hero dismissal.
- For starters, dismiss duplicate heroes and other 1* Heroes that are already maxed. If you are running out of space, dismiss heroes that are easy to farm from normal battles.
- Statue Heroes: Dismiss them too to get lots of materials and Coins.

Hero Pieces
- Hero Pieces earned through dismissing heroes can be used to increase the Skill Lvl of Heroes. Unlocked from the Barracks at Lvl 11.

- Note: To avoid getting your precious heroes be dismissed by mistake, protect them by turning on the [Like] button on their profile page.

Follow Your Main Quests
- Focus on them to quickly unlock more freebies like Stamina, Coins, Gems, Heroes, and more.
- Check your Quest again every after a fight, and claim all rewards from your Inbox before they expire.

- Clear Coastal Fortress-3 then claim her from a Mission Quest. She is a nice starter leader for early game, especially when you don't have any good Leader Buff that benefits the whole team at the moment.

Picking a New Hero
- If a Quest requires you to draw 1 Hero from the Gacha, get 1 from the Friendship Gacha to save your Gems for later. Earn your Gems for opening Barracks and for the Premium Gacha 10-Times Set option.

- Along with the normal login events that gives nice rewards, there is also a bonus that will extend your Stamina for more gameplay time.
- Stamina can also be earned as Login Events at 9:00 AM, 12:00 PM, and 6:00 PM (UTC+9).

More Stamina (Easter Egg?)
- If you go to the Camp screen and click spam your heroes, they will drop a random reward, mostly Stamina. Keep harassing them haha!

Best Ways to Use Gems

- Number 1 and probably the best way: Use your Gems to at least unlock 2 more Barracks early game. This will enable you to train multiple heroes as you go. Certain quests and achievements will also require you to do this anyway, so go!

- Next, earn your remaining Gems for the Premium Gacha draw. Always aim for [10-times Set] option to get at least one 4* hero guaranteed.

- Used to expand Inventory Slots, but only if you really need it, probably after getting your first Premium Gacha 10 times draw, but still optional.

- Gems can also be used to buy certain items that you might need from the Black Market, preferably around mid-game, and if you have extra Gems to use.

Helper's Leader Buff
- Only applies to your team if the Helper is your friend. Send friend requests to add them, and to earn more Friendship Points.
- You can re-roll the list by re-entering that same stage, useful for choosing specific heroes.

- When the magic seal becomes smaller and meets the red target area, tap the skill button to activate a more powerful skill.
- If the magic seal is perfectly on the target, [BLITZ] will activate. A miss hit may give you [GREAT], and this will increase the skill's effect.
- Combos are when you succeed at Blitz several times in a row. 200% of skill damage based on the current skill level will be applied every 5 combos, and the combos reset.

Mana/MP Globe
- Always reserve enough Mana for the final battle.
- TIP: Before the final boss stage, try to stack 2 or 3 Blitz Combos, then use your 3rd, 4th and 5th Blitz Combos for extreme damages!

Premium Gacha
- Available for purchase with Gems.
- 3* to 5* heroes can be drawn.
- For 10 times Premium Gachas, you'll get at least one guaranteed 4* hero. This is what you want to get, earn your Gems until you have enough for the [10-times Set] option.

Friendship Gacha
- Available for purchase with Friendship Points.
- 1* to 4* heroes can be drawn.

Event Gacha
- Can be purchased with Gems and increase the probability of obtaining special 3* to 5* heroes.
- This one varies per event and is limited to Class, Rarity, or Element for example.

Medal Box Gacha
- Also an event based Gacha, but requires a lot of Gems.
- The Medal Count of the box is pre-determined and it is decreased for each draw.
- If a 4* hero is obtained through Gacha draws, the chance for getting a 5* hero will increase.
- Once you are able to get a 5* hero, the Change Box option will become available. Use this to reset the Medal Count, giving you a chance to obtain another 5* hero.

Option Card Gacha (Shop)
- Can be purchased with Gems or Coins.

Option Cards
Option Cards are items that can be equipped on heroes to give additional stats.

Equipping Cards
- This is entirely up to your style, but only equip high rarity option cards to your main heroes.
- Normally, tank or front line heroes will benefit more on your Gold cards, while DPS/Attackers/back-line heroes can utilize the Red cards more. The Blue cards can be used as a support stat, depending on your play style.

How to Get More Option Cards
- Option Cards can be earned by clearing the Infinite Challenge, or picked at the Shop.
- A rare drop from normal battles.

Available Training per Summoner Level
- Explore additional options as you increase in level.

Leader Buff Training
- A hero's Leader Buff can be trained up to a maximum level of 20, available at the Guild Barracks after joining a guild. Guild Coins are used for Leader Buff training.

- You can take Coins and Soulstones from defeated players.
- You're vulnerable to attack while offline and opponents are free to attack you. If you are defeated, you'll also lose the Soulstones.
- Therefore, in order to protect the Soulstones...stay connected, use them right away, or try to create a formidable team. They also added a Pillage shield feature that can be purchase with gems to get protection against pillaging, but searching for an opponent in the Pillage War while the shield is active will immediately disable the shield.
- A protection effect will be applied for those under Lv.10.

- Preferably, choose an opponent with lesser Power than your team.
- *Honestly, I'm not really a big fun of the Pillage Wars system, so many balancing issues...but it's good that they are working on this.

- Pillage War now expends stamina, thus Pillage War Stamina feature is added.
- Engaging once in the Pillage War consumes 1 Stamina point. You can possess up to 10 points and it takes 10 minutes to recharge 1 stamina point.

How the Shield Works?
- The ‘Shield’ is a vital function to protect the masters during the Pillage Wars!
- The Shield activation conditions are shown below. Please, keep them in mind to protect your precious Soul Stones and Coins.

Deactivation Condition
- When you play the pillage war while you are being shielded.
- When you are neither online nor shielded.

- No Stamina requirement, and can be played up to 5 times a day.
- You will earn points every time you defeat an opponent, which determines the final result and rewards at the end.
- Common Drops: Coins, Drillmaster's Whistle, and lots of Option Cards!

Ranking Points
- Points earned from Infinite Challenge are added to your Ranking.
- You earn points every time you defeat enemies. More bonus points will be obtained when conquering the 7th floor.
- Higher stages are more challenging but also give more points.

Ranking and Ranking Points [Lvl 10]
- Here's the place where your Ranking Points will go. There are 3 ways to earn points:
- Fight your way through Normal Battles, break through the floors in Infinite Challenge or steal Soulstones from other players through the Pillage War.
- Normal battles and Infinite Challenge scores are capped at 50k per day no matter how well you do, but there's no limit to Pillage Wars.

- You can get various materials every day in the Special Dungeon, needed for Awakening and Evolving heroes.
- Note: This place will require you to create teams that are Mono-Color (ex: Water Heroes only) or Mono-Class (ex: Warrior and Lance Heroes only). So, it's best to upgrade multiple backup heroes for this one.

Daily Dungeon
- Daily Dungeons are dungeons which become available each day of the week, featuring certain Class and Element for your hero's development like Awakenings.

Advent Dungeon
- Advent Dungeons are dungeons protected by rare hero bosses who are not obtainable through Gacha. Might be difficult to complete, but clearing the dungeon will reward you with the Rare Hero from that dungeon.

- If you join a guild, you can share a Helper with other guild members, access the Guild Quests, Guild Shop, and unlock Guild Barracks.

Guild Quests
- If you've participated in a Guild Quest at least once, rewards are automatically sent to your Inbox when the Guild Quest is completed.
- Each guild member will earn contribution points as they carry out the guild quest.
- Rewards will be distributed depending on contributions.

A Notice to All Guild Leaders (from Nexon)
- "We take the behavior that the guild leader is receiving all the guild quest rewards by taking the advantage of their power as abusing issue.
Any guild leader who is taking the abusing behaviors will be banned according to our operation policy. Thank You"

The PvA Mode of the game, where you can battle another user's team.

Arena Rankings and Master League
- Earn a promotion to the next rank by collecting Stars after winning, but you will also lose Stars after losing. If you have no Stars left to lose, you will be demoted to the next lower rank.
- Arena rank falls when you are defeated in the Arena and lose all your stars as a result.
- In Rank 9, you don't lose stars even if you lose. In Rank 8, your rank doesn't fall lower even if you lose.

- The Arena consists of 10 ranks and the Master League.
- The Master League can be accessed by fulfilling the required Stars from victories after reaching Rank 1.

Season
- Each season lasts for a week, and you can get special rewards depending on your rank.
- One season of the Arena takes place from Monday to Sunday. It begins at 6:00 AM Monday and ends at 10:00 PM Sunday (UTC+9).
- Arena is closed after 10:00 PM Sunday for determining rankings and rewards (UTC+9).

Arena Cost and Banned Heroes/Class/Element
- These are some rules that you should follow when creating teams for the Arena.
- The Arena Cost is randomly chosen at the beginning of each season.
- There are also banned heroes which cannot participate for each season.

That's it for now guys, and thank you for checking our quick walkthrough, tips, and strategy guide for the Android and iOS RPG mobile game Medal Masters.