✔ Strife D Leingod Published 12:11 AM
Tags
Bloodline: TLRV Guides
Vampire Sanctuary unlocks once you reach Squad Lvl 20. As you explore further, you'll encounter other player based teams forcing you to fight them in order to unlock more areas. Gather Gold, Materials and even Rare Heroes or Fragments from after battle Chests. 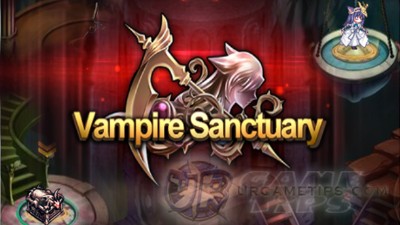 - The Requirements and Rules -

Hero Selection
- As stated under Rules, you can select up to 15 Heroes that are Lvl 15 or higher.
- While selecting Heroes, also take note of the current "Bonus of the Day".

HP and Fury Bars
- During the exploration, Heroes can't regenerate back their HP but their Fury bars will carry over to the next battle. This can be covered by potions though and some healer heroes if you have.

Set Items
- After the hero selection screen, you'll be given a choice whether to bring an Offensive or Defensive set of items, choose what you need for your team.
- Note that you can only use an item after your opponent's turn, if one of your Hero attacks, you can no longer use any item until your next turn.

Hero Restriction Status
- Participating Heroes cannot be Sold, Infused, or Evolved until the exploration is over.
- There is actually a work around here, just in-case you really need to evolve a Hero.
- TIP: You can purposely end the exploration by letting all of your Heroes be killed, or wait for the reset time at 5:00AM (GMT+8).

Other Restrictions
- Squad Lvl 39 and below can only unlock until 12/15 levels. To unlock the remaining 3 levels, you need to reach Squad Lvl 40.

How Enemies Are Generated
- Well, this feature is commonly seen from other RPG games, and if I'm correct, the enemy teams that you'll encounter will also be based from your Top 5 Heroes' Total PWR, so far it is.

- Note: Game creators can control the difficulty of this feature, and will often implement through game patches. If you want them to make it easier, talk to the community and create a discussion on their official forum with topics like "Vamp Sanc is freaking hard !@#$" or something like that hehe.

- Also, if you are thinking of lowering your Arena rank will give you some advantages, well it is possible at certain Squad Lvl ranges because the teams generated are based from the Arena (DEF Squad Teams).

Countering Teams
- Learn how to counter enemy teams by reviewing their Heroes, Lvl, Element, and Number of Stars before the battle. If you are very unlucky, you'll also eventually encounter a team with insane stats, forcing you to use multiple teams or backups, hopefully not.

Leader Options
- Heroes with Leader Skills that can regenerate HP, modify Attack or Defense are some of the recommended Leaders for Vampire Sanctuary.
- If you like Leaders with Attack Modifiers, try to get one that will enhance the current "Damage Bonus" of the day, for more damage %.

Just a Suggestion for F2P Players
- If you are looking for a decent healer type Hero early game with a nice Leader Skill, try BloodDemon Rin. A 3* Hero that lets your team regenerate their HP by 250 every time they attack.

- BloodDemon Rin is easy to farm too, unlock Challenge Mode then complete Contract stage 10 times (2 Days). Redeem 10 BloodDemon Rin Fragments in the Divine House (Village) to get her.

- Next, if you need a better healer, Disciple Eagle is also a good choice, you can start farming him once you unlock the "Sword Kiraeld Combo" stage in Chapter 2 under Challenge Mode. He is a decent healer that can be upgraded to 4 Stars.

- If you have Ara or similar healer type heroes then use them right away instead.

Charging Fury Bars
- Optional: During the first few battles, try to fill up most of your Heroes' Fury bar by switching Heroes, then use them when needed.
- At the character selection screen, just above their character portraits, you can check their HP = Green Bars, and Fury = Red Bars.

Experiment With Locked-on Attacks
- Tap on target if you want to do a focused attack. Example: If you want to quickly take out a certain hero from their team.
- Tap the same target again to remove the lock-on effect and let your heroes attack enemies on their own.

- To Quit a battle, select the button located at the "upper left corner of your screen" then quit.
- Quitting battles will bring back the HP and Fury bars (original state before the battle) of your Heroes, and will also return used Items, Cool!
- If you can no longer beat the next team, maybe it's time to hit or wait for the RESET button, OR, continue upgrading your Heroes then go back and try again.

Battle Rewards
- You can't get any EXP from these battles, but you can open bonus chests after winning battles.
- Rewards can be a handful of Gold, Materials, Heroes or Hero Fragments.

- If you are one lucky bastard, you can also get a SUMMON SCROLL here! ^^

- It is also possible to get a Full 3*, 4* or even 5* Hero unit here, but this might be an in-game bug, let's see. It's weird because my friends did actually get a full 4* and 5* Yan here, and Yan is quite common too on other Bloodline communities as Vamp Sanc drop.

Dungeon AI Boss!?
- As you venture inside the Vampire Sanctuary, you will be encountering some AI Heroes that you can fight 1 vs 5. They are pretty powerful but doable with certain setups.

Here's Some Tips
- Since it is 1 vs 5, countering his or her Element is easier, use it especially when choosing tanks (damage takers like warriors).
- Before the battle, get your Fury attacks ready or almost full (this is optional though).
- Use your items wisely, if the enemy hits hard, start by using DEF potions to your tanks to keep them alive and sturdy for 3 rounds. Keep your Heroes close to green health to avoid getting 1 or 2 hit KOs.
- Heroes with an ULT Skill that can Paralyze the target also works great, giving your team some extra turn/s.
- If all still fail, you just need to upgrade your Heroes and team, then try again.

Rewards
- Still Gold and Fragments but this time, a Hero Fragment that can go to 5 Stars.

- I believe Hero Fragment rewards will also depend on the current game update.

Secret Treasure Chamber
- As you venture inside the Vampire Sanctuary, you will also be encountering "Locked Chests" that can only be unlocked by VIP 9 players, a Master Wallpass Skill or a Chest Key.

Where Can I Get Chest Keys?
- You can also randomly get them from after battle chests.
- Rewards are also the same like a normal chest, but with higher sum of Gold, Materials, and 4x Fragments that can be maxed up to 5*.

What is Master Wallpass Skill?
- A skill of a certain Hero? Not sure about this, hmmm.

That's it for now guys, I'll add some info soon for the missing parts, the best part is Vampire Sanctuary doesn't use Stamina to play. ^^