Bloodline: How to Level Up Heroes and Farm Growth Materials

✔ Strife D Leingod Published 11:48 AM
Tags
Bloodline: TLRV Guides
Leveling Up a Hero will increase his or her Attribute Stats, and unlocks new Equipment Upgrades. It will also increase their PWR rating, Skills, and more. When maxed, more features can be unlocked like Evolving Heroes. 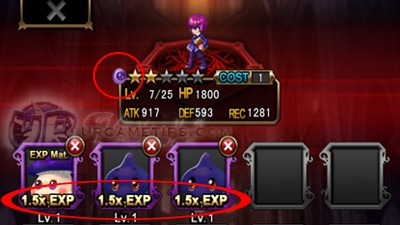 Hero Stats:
- HP (Health Point): Health capacity of Hero.
- ATK (Attack): Damage dealt by Hero.
- DEF (Defense): Defensive power of Hero.
- REC (Recovery): Effectiveness of healing when Hero is being healed.
- POT (Potential): This can be any of the above Stats. Potential indicates the area whereby the Hero can enjoy a greater growth rate. The Hero's Potential can be traded in Potential Awakening (unlocked at Squad Lvl 22).

Simply by completing dungeons and other battles, participating heroes will gain Hero EXP.

Leader Skills
- Some Skills like Ron's Leader Skill, can affect the EXP gained by your heroes after battle. If you want to get some boost, then use Ron as your squad Leader, especially early game.
- A nice Leader when raiding dungeon stages.

One of the basic ways to level up heroes. Go to the "Fuse Hero" screen, and select the hero you want to level up.

Selecting Base Heroes
- Preferably, you might want to select Heroes that can go at least 3 Stars Max, and make them as your starter Heroes. As you go on, try to get Heroes that can be maxed until 4 or 5 Stars Max.

Selecting Heroes/Materials for Fusion
- It is highly recommended that you select Heroes of the same element to provide +50% more EXP.
- Just remember, use Fire for Fire, Water for Water, and so on...

- To do this easily, just hit the [Proposed] Button to automatically select and gather all recommended Heroes for Fusion.
- Refer to the screenshot above for sample Fusion, and Materials used.

- By default, the [Proposed] feature will not include EVO Mats and Skill Mats because they are used for Evolution and ULT Skill upgrades, but if you don't need them, then add them manually.

Excluding Needed Heroes/Mats
- If there are Heroes or Mats you don't want to include, then remove them from the list.

- Example #1: Aside from the Heroes labeled with Evo Mat., some heroes like "Slimes" can also be a requirement for Hero Evolution, so either reserve some for later, or use now and farm them when needed, your choice.
- You can check the next evolution materials of your Heroes by checking them up via the Evolve Hero feature.

- Example #3: Never use Heroes with 3* Yellow Stars and above as Fusion material unless you intend to for activating Limit Breaks, but if you don't need them, sell them instead to get 3 Crystals per 3* Hero.

How To Farm Heroes for Fusion
The most common Heroes and Materials used for fusion are:
- Slimes, Shrooms and Heroes with 2* "Yellow" Stars.
- Evo Mats, Skill Mats and other Mats are optional, but if you don't need them then it's ok.

Normal Drops from Dungeons
- Just continue and complete more Plots or Stages to gather some of them.

Using the "How To Obtain" Feature
- If you have your target Hero or Mat from your inventory, then just hit the "Check" button and refer to the "How to Obtain" window.
- If you don't have it, but you've used it before, then go to Main > Menu (next to Notice) > Hero Memoirs > Search and Select the target Hero or Mat > How to Obtain Info.
- If a stage is available, select "GO" and start farming, use the RAID feature to make things faster.

Buy Them from the Airship Shop (Village)
- You can also buy Shrooms or other Materials here using Gold.

- The Guild Feature: Tower of Time -

This might be somewhat difficult for newbies because Guilds have different requirements like:
- Minimum Lvl
- Minimum PWR (depends on the guild)
- Unlocked this and that
- VIP only players
- Language based like English only, etc.
- or simply because it's a private guild, for friends and relatives only.

So if you are a new F2P player, it's better to play under new servers, because you might get a better chance of getting into a guild, much better though if you know some friends. 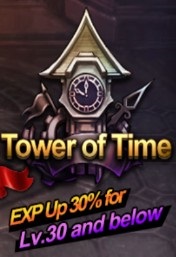 So, What is Tower of Time?
- It's a guild feature that will let your Hero/es gain a set amount of EXP and Lvl up faster!

- The Lobby area is free, but the higher ones however can only be unlocked by at least VIP 6 accounts. The Royalties' Hall will give the same EXP, but the Lord's Hall will generate huge EXP bonus and less cool-down.
- Heroes that are under Lvl 30 will get 30% more EXP.
- Placing a Lvl 1 Hero in the Lobby for example, will instantly level up that Hero to Lvl 17!

- You can only boost 1 Hero per Chamber, then you will need to wait for the cooldown timer (23 Hours) before you can use that same room again.

- More info about the Lord's Hall can be found under the Tower of Time Rules.

- How to Upgrade Hero Equipment -

Upgrading Equipment
New Equipment tiers can be unlocked and upgraded as the Hero level increases.
- Most Heroes can have 2 types of equipment: Weapons and Armor.
- Heroes who are unable to use equipment usually have a higher growth rate.
- Some higher Lvl Heroes have exclusive equipment which greatly increases their attributes.

The Red Button
- If you see this, Check your Hero > Heroes Info > Select Hero > Check > Select Equipment > Level Up.

How to Get the Materials?

Normal Dungeon Battles
- As you play through the game and complete quests, you can unlock and gather some Materials from the start.

- Under the Equipment Selection Screen, you can tap on the materials you need to check where to get them. If the stage is available, go and raid them, if not, then you need to unlock more plots and stages to make them available.

Buy From the Airship Merchant (Village)
- Only buy materials that can be purchased with Gold.

Vampire Sanctuary (Squad Lvl 20)
- Defeat all enemies to get more materials from after battle chests.

Trade Crystals (Divine House - Village)
- At higher Lvls, you can Sell 3* Heroes that you don't need to get Crystals.
- Go to Village > Divine House > Crystal Trade > Item > to trade your Crystals for Materials.
- This is optional though.

I Reached the Max Lvl What Now?
- If available, Hero Evolution will be your next focus.
- Check our Evolution Guide HERE.

Related Bloodline T.L.R.V. Tips & Guides:
- Bloodline: How to Evolve Heroes and Farm Evolve Materials
- Bloodline: What is Limit Break and How to Trigger It
or