Team  up against the computer and harness your mastery of physics to barrage your opponents from afar with precision-thrown bombs, or simply charge in and toss your enemies off the nearest cliff! 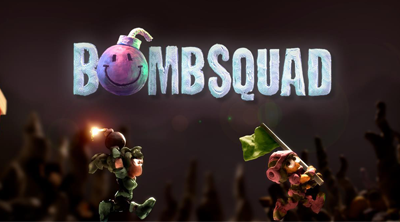 Set Your Controllers and Profiles First

- Go to Settings > Controllers
- Configure Touchscreen: Adjust the scales the way you want then drag the 2 controls to re-position them according to your gaming style.

- Mobile Devices as Controllers: If you are short on controllers, install the BombSquad Remote app on your iOS or Android devices to use them as controllers. Links here for iOS or Android.
- Players can join and leave in the middle of most games, and you can also plug and unplug gamepads on the fly.

- Create player profiles for yourself and your friends with your preferred names and appearances instead of using random ones.

- Despite their looks, all characters' abilities are identical, so just pick whichever one you most closely resemble.

- Here you can practice against bots. Learn the curves, master the controls and combos, then show your skills against your friends or other players.

Punch
- Punches do more damage the faster your fists are moving (physics based), so try running, jumping, and spinning like crazy.
- You can aim your punches by spinning left or right.
- Spinning or running punches are useful for knocking bad guys off edges or scoring in hockey.

- A perfectly timed "running-jumping-spin-punch" can kill in a single hit and earn you lifelong respect from your friends. If you kill an enemy in one hit, you get double points for it.

- How to Do the "running-jumping-spin-punch" Trick:
- Running: Tap and Hold Jump and start running towards your target, try to maintain a straight line.
- Jumping: Before you reach your target, release and tap on the Jump control again to perform your jump. Do the Spin right after jumping.
- Spin: While in mid-air quickly spin to any direction using your "movement control". Just move it around, any direction will do, just make sure that your character is spinning mid-air.
- Punch: Upon contact, hit Punch to deliver killing blow!

- Here's some tips that you might want to practice first:

- Method 1:
- Go to the first Campaign Stage under Co-Op to practice this:
- Move closer to your target but give some space, then Jump > Spin + Punch upon contact. Learn where you should start your Jump, and when to Spin then Punch.
- If you knocked the enemy down, you did it right.
- Sometimes, spamming Punch will do the trick.

- Method 2:
- Go to the first Campaign Stage under Co-Op to practice this:
- Tap and Hold Jump and start running towards your target, run around first if you need to.
- Once you get closer, Jump then Punch, don't Spin for now. This is to practice where you need to start your Jump.
- If you knocked the enemy down, you did it right.

- If you can do the 2 methods above, try and practice the "running-jumping-spin-punch".
- If you killed a fully healed enemy in one shot, or if the knocked enemy is "red" and blinking , then you did it right! Congrats! ^^

- When is the Best Time to Do this Trick?
- Anytime you feel confident doing it, or if you see these opportunities:

Pick Up and Throw
- Many things can be picked up and thrown, including other players. Tossing your enemies off cliffs can be an effective and emotionally fulfilling strategy.

- Grab flags, enemies, or anything else not bolted to the around. Press again to throw.

- Throw strength is based from the direction your are holding.

- To toss something gently in front of you, don't hold any direction.

- If someone picks you up, punch them and they'll let go!

Jump
- Jump to cross small gaps, to throw things higher, and to express feelings of joy.
- Recommended control for Running (tap and hold).

Bomb
- Stronger than punches but can result in grave self-injury if not thrown before bomb explodes.
- If 2 Bombs clashes, both will explode, so be careful!
- You can judge when a bomb is going to explode based on the color of sparks from it's fuse: yellow..orange..red..BOOM!

- How to Do the "Cooking Off" Trick?
- For best results, throw towards enemy before fuse runs out. Keep moving and don't stand still when throwing Bombs though.

- Start the count right after you select bomb, then throw on 3, you can also throw it after 3 seconds if your enemy is somewhat closer to you. Time it well though or else, you'll get hurt too.
- This way, bombs thrown will instantly explode upon landing, and are harder to dodge because they don't have time to move.

- If you see someone doing this trick, better start running because simply walking won't help you dodge the bomb, especially against opponents that can time it perfectly.

Run
- Hold down any button to run. You'll get places faster but won't turn very well, so watch out for cliffs.
- I recommend using the jump control (tap and hold) for running.
- If possible, avoid staying near cliffs to avoid being thrown or knocked off edges.

Energy Shields
- Absorbs a bit of damage so you don't have to.
- Don't get too cocky with that energy shield, you can still get yourself thrown off a cliff.

Triple-Bombs
- Lets you whip out three bombs in a row instead of just one.

Med-Packs
- Restores you to full health. You'd never have guessed.

Ice-Bombs
- Weaker than normal bombs but leave your enemies frozen and Particularly brittle.
- Ice bombs are not very powerful, but they freeze whoever they hit, leaving them vulnerable to shattering.
- A nice setup before doing the "running-jumping-spin-punch" to defeat them in a single hit!

Trigger-Bombs
- Slightly weaker than regular bombs. but they explode on impact.

Sticky-Bombs
- Stick to anything they hit. Hilarity ensues.
- If you let a sticky-bomb stuck to you, jump around and spin in circles. You might shake the bomb off, or if nothing else your last moments will be entertaining.
- The head is the most vulnerable area, so a sticky-bomb to the noggin usually means game-over.

Land Mines
- These come in Packs of 3: Useful for base defense or stopping speedy enemies.
- For best results, plant it on bot or player spawning areas.

Curse!
- You probably want to avoid these ...or do you?
- If you pick up a Curse, your only hope for survival is to find a health powerup in the few seconds.

- In hockey, you'll maintain more speed if you turn gradually.

- In Cature-the-Flag, your own flag must be at your base to score. If the other team is about to score, stealing their flag can be a good way to stop them.


Troubleshooting and Other Tweaks
- If your device get too warm or you'd like to conserve battery power, turn down "Visuals" or "Resolution" in Settings > Graphics.

- If you frame rate is choppy, try turning down resolution or visuals in the game's graphics settings.

- Tired of the soundtrack? Replace it with your own! See Settings > Audio > Soundtrack.

Hello Fellow Gamer! ^^
If you have discovered an awesome BombSquad tip, trick, or strategy, feel free to share them here too by using the comment section below this guide, thanks for helping other players!
Same if you need help or have questions about the game.