Chaos Fighters: What are BMVs or Converters? - Basic Modifier Value on Fighters

✔ Strife D Leingod Published 12:49 PM
Tags
Chaos Fighters Guides
Here's a game guide to understand the role of BMVs or Converters on Fighters in the RPG versus game - Chaos Fighters, available on Android Google Play and iOS App Store (mobile devices). A BMV (Basic Modifier Value) is a key number in the game that will reveal the true potential of a Fighter. Each fighter will have a specific set of BMVs that will greatly affect the character's overall stats, learn more below. 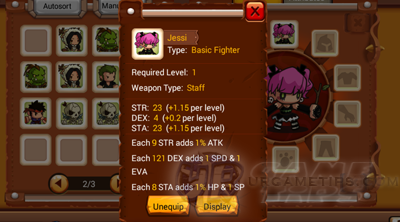 - The BMV or Basic Modifier Value (aka Converters) -

- If the total number of STR goes up more, the gap between the 2 Fighters will increase.
- So, based from the results above, the lower your fighter's BMVs, the better!

- Now that you understand that BMVs should be low to get nice results, but this time, Jessi's DEX BMV is ridiculously high! My point is, BMVs will also help you understand what you should or shouldn't do with your Fighter/s.

- Jessi's 121 DEX BMV clearly recommends that you shouldn't invest on DEX because it will only yield very low results, right?

- Jessi's STA BMV is also low, so it's good!, but again, BMVs will also help you understand what you should or shouldn't do with your Fighter/s.

- If you are looking for equipments for your Jessi, and you're wondering if which is better between the two: STA +80? or HP +8%?

- Note: If both STA +80 and HP +8% are on the same equipment, that's awesome because it will yield better results on Jessi.