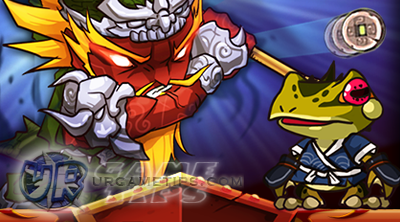 General Pet skills can be randomly learned by all Pets. Note that the skill names below might be different in-game but the stats should be the same.

Attack
- 20% chance to strike the target for 50% of your Attack.
- This active skill, is like a double edged sword, sometimes it's good but most of the time it's really bad, because it can disrupt your "Freezing Skill" and it can also trigger your opponent's defensive skills! Learn only if the disadvantages are ok with you.

Defense
- 10% chance to block an enemy's attack for you.
- This active skill can really save you countless times, still depends on luck though.

Exclusive or Unique Pet Skills can only be learned by specific pets, and will be added together with the general skills above. Note that the skill names below might be different in-game but the stats should be the same.

Ghost Tiger
- Active Skill: [Disperse]
- Grants a 10% chance to remove a negative status effect on you and deal 50% of it's master's damage.

Slime
- Active Skill: [Poison]
- Grants a 10% chance to poison the opponent and deals 50% of it's master's damage.

Toad King
- Active Skill: [Weakening]
- Grants a 10% chance to weaken the opponent and deals 50% of it's master's damage.

Vampire Bat
- Active Skill: [Bloodsucking]
- Grants a 10% chance to absorb HP, deals 50% of it's master's damage and restores the master's HP by 50% of it's damage.

How to Get More Pets?
- Starting from the 3rd adventure stage, elite monsters and bosses have a chance to drop pets.
- Buy pet eggs in the mall and get a random pet.

- At Character Lvl 31, the Laboratory will become available. Enter and transform your +0 Pets to your preferred ones.

How to Learn Pet Skills?
- Go to the Pet House and Feed your pet/s.
- Pet food is the most important factor to power acquisition. The default food is the most common. Players can use the "refresh" function to improve the food quality and obtain more power.

- Players need to consume power to acquire a new random pet skill. When all skill slots are occupied, the new skill will  randomly replace an existing one.
- Players can use "Pet Locks" to lock a skill and prevent it from being replaced. Use it only if you have at least 3 skills, and note that it will be consumed after learning a new skill.

How to Unlock More Pet Skill Slots?
- Every pet has 3 skill slots initially, an extra skill slot will be added every 3 levels or +3 pet upgrades.
- Important Note!: DO NOT UPGRADE your pet to +1 or more if your pet doesn't have 3 preferred skills! This is because every time your pets levels up, an extra 200 power points will be added or consumed, thus it will take longer for you to learn a new skill.

How to Upgrade Pets?
- Go to the "The Forge" and use the "Fuse" function.
- You can only fuse 2 [+0 Identical Pets] to you main Pet, and both will disappear after fusing. Higher levels will have lower success chances.

How to Evolve Pets? NEW!
- Evolved Pets have access to upgraded skills and abilities as well as awesome new appearances! To turn your Pet into an Evolved Pet, you need to first get it to +27 then use your Energy to do this.
- Once you have an evolved pet, you can continue to level up your Pet and train it in new Specialist and Extreme stat skills.
- Example Extreme skill: Extreme Fury (+50 Critical). Yup it's the same with Fury: CRT +50 above but the point is, you can get them both increasing your CRT to +100.