✔ Strife D Leingod Published 5:21 PM
Tags
X-Fighting Guides
Here's a game guide to help players decide which starting fighters is best to begin with in the RPG versus game - X-Fighting, available on Android Google Play and iOS App Store (mobile devices). All starting fighters are basic, so as you progress through the game, you might eventually change them, but picking the right fighter early game will help you reach your preferred class build without too much hassle, so pick wisely! 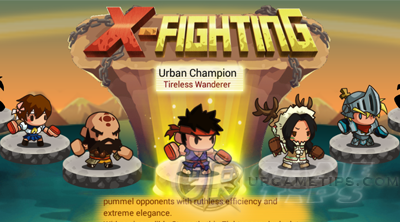 Urban Champion (Tireless Wanderer)
- Rocky, a former champion prize fighter, now wanders the land in search of the ultimate duel. His fists pummel opponents with ruthless efficiency and extreme elegance.
- With an incredible Strength, this fighter can deal a lot of pure damage with each attack.
- Rocky is a master of fire skills and uses fist weapons.

Eaynah (Huntress of the Ice)
- Raised in the frozen wilderness, Eaynah uses her extreme dexterity to track and destroy her prey as well as escape deadly situations.
- This Fighter gains substantial bonus in Dexterity, letting her strike faster and evade her enemy's attacks more. Eaynah is a master of water skills and uses heavy weapons.

Lance (Gallant Knight)
- Lance uses his martial skill guided by virtue to destroy monsters and protect the realm.
- With a good balance of Strength, Dexterity, and Stamina, he can dish out damage, attack with speed as well as evade and take blows as necessary.
- This Fighter is a master of thunder skills and uses swords.

Sakura (Street Bruiser)
- Known for getting into too many fights, Elize roams the streets looking for a new challenge. Her emerald eyes unwavering, those foolish enough to fight her see only her fists.
- Hew high Stamina ensures that she'll outlast enemies in a fight by taking more hits while she taked them down without tiring. Elize is a master of healing skills and uses fist weapons.

Monk (Walker of Wind)
- Ending his wind training in solitude to rejoin the world and compete, Bokor strikes with dreadful might, making short work of any enemy that stands in his way.
- With an extremely high Strength, this fighter takes full advantage of each attack, dealing significant damage. Bokor's a master of wind and uses staff.

Other Notes:
- If you want to know more about BMV's go here:
- X-Fighting: What are BMVs or Converters? - Basic Modifier Value on Fighters