Tower of Saviors: Tips and Walkthrough Guide - How to Defeat Seal Bosses With Beast Team 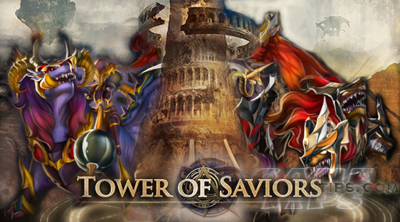 I highly suggest you follow the guides listed below first until before unleashing the Second (Sirius Brothers) or Third (Odin) Seal.

Important Links to Follow First:
- Tower of Saviors: One Good Way to Start a Beast Team for Free Users - Walkthrough Guide
- The above link will guide you on how to get some beast cards early game to make things easier. Please refer to the "Tips to Remember While Playing" section there for more info on how to manage your friends list, team, inventory, and diamonds farming early game.
- After getting the starter Beast cards you like, proceed to the next guide below.

Things To Do Next
- From here on, feel free to expand your Inventory if you need to.
- If you haven't done already, boost your Lvl during Saturdays' Greedy Day (Elite), and Sunday's Golden Day (Elite) to increase your "Team Cost", Stamina and Coins. Still good even after Lvl 50.

Diamond Farming
- Make sure that you you have 20 Stamina for Instant Battles.
- Earn your Diamonds and draw cards at certain days (increased draw rate for a specific attribute) according to the card/s you need. Example: If you need an Underworld Cerberus card, draw Diamond Seal cards if the day or week has a "Higher chance to get Fire Cards" event.

Optimize your Friends List or Allies
- As you go on through the game, add all adventurers using Beast cards as their featured Ally. Here are some sample recommended beast cards that you might want to consider adding. Higher rarity, the better, also great if with nice CD (active skill).

- Remove inactive friends (more than a week or less) if you need to. Mainly to free up space, to get more active friends for more Friend Points, or to add more powerful allies, especially at higher Lvls.

- It is also ok to add non beast allies (see examples above), as long that their Leader Skills can help your team. Note: When using Daji, only stack "3 Runestones per Set" to get very high combo counts.

Team Management
- Werewolves are your best farmable beast cards to get here as team members, replace them when you get better beast cards. Also, you should know by now how to Lvl up and evolve your cards.

Like any other race, teams, or cards, Beast team will also use Converters to help you deal massive damages, also known as Bursts. Here are some examples to give you ideas on how to manipulate your beast team.

Converters
- Converters are cards that can switch certain type/s of Runestones into another type/s. Useful to create combos and damage bursts, but make sure they work well with each other.

- Example Skill Combo: [GSoD] + [Cerberus]
- GSoD will covert Light to Heart, then Cerberus will convert all Heart to Fire for possible burst.
- For best results, do this when you have lots of Light runestones.

- Example Skill Combo: [GSoF] + [Baphomet]
- GSoF will covert Earth to Heart, then Baphomet will convert all Heart to Dark for possible burst.
- For best results, do this when you have lots of Earth runestones.

- Experiment with them to learn how to chain combos (5 combos or more) or do a series of bursts!
- Don't forget that the outcome of every battle will always depend on your own runestone stacking skills. Do not rely on the "Suggested Path" option, because it can't teach you how to stack 5 runestones, and it will eventually disappear anyway.

Start clearing stages, any team combinations should be able to blitz through easily, a good opportunity to practice your own moves and combos.

- Tips: Quickly eliminate the 2 little monsters first ("tap on them to lock your targets"). If succesfully eliminated, attack Saruman with all you've hot. If Saruman summons them back, repeat these steps.
- Don't forget to activate your monster's skills, this should be easy.

While clearing "NEW" stages and floors, Evolve your wolf cards to Werewolves after maxing their Lvls! Increase your Lvl too, to increase your Team Cost and Stamina.

Unleash the Second Seal - Sirius of Solar Eclipse and Sirius of Lunar Eclipse
- Make sure to pick a nice offensive Beast as your ally.
- Before the boss stage, try to keep your HP high.

- The enemies live on each other, as long as one is alive, the other eliminated one revives.
- There weakness, is there high skill CD. Try to reduce both HP bar to near death, then kill them simultaneously. If one is alive, the dead one will revive to full HP if the CD of the living one reaches 0, so you still have a chance to kill them both.

- Note: 5 or more runestones of the same color will attack both monsters, use it wisely.
- A nicely leveled team with two 250% attack as Leader and Ally helper, you can finish this in 1 or 2 turns with some nice combo moves.

Continue clearing stages, this time top stages per island region will have the same skill concept similar to Saruman the Evil Lord boss above. 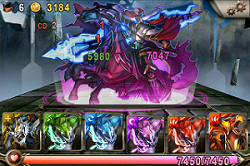 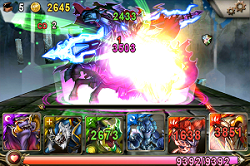 - Team should be leveled up quite a bit, to get better stats, GSoF will greatly boost your Recovery rate to survive the battle. GSoF should also have a nice CD to use it's active skill when needed, time it well.

Observe Odin's CD, make sure you have enough HP before he attacks, heal using Heart runes and skills to survive. Just keep on going, once you got your rhythm, it's gonna be easy.

After unleashing the 3rd Seal, take your time to evolve and increase your team's Lvls before storming all new floors in the Glacial Iceberg. Here are some tips you might want to do next while doing the usual things.

Leveling Up All Lvls
- Review leveling and monster combinations guide after 3rd seal here: Tower of Saviors: Leveling and Combining Guide for Monster Cards and Player Level
- Your best shot to get easy evolve materials is to farm the Daily Battles in the Lost Relic Special Battles. Go here for more info: Tower of Saviors: Evolution Guide - Where to Get Evolution Materials and Farming Locations
- Continue farming Transmigration Stages and Instant Battles for more high EXP Soul Stone cards.

- Farm EXP on some of the easier Zodiac Elite or Master Stages, which are Libra, Capricorn, Cancer, Aries, then Pisces. Just complete and stay where you are comfortable with, you don't need to rush them all.

- Reach 8,000+ HP and pick GSoE, GSoF or similar cards as your ally to prevent getting one-hit killed by those "For Evolve" zodiac monsters (hopefully you won't encounter the "The Fortune Teller"), 2nd stages should be enough for you, go for Master stages later. Players love it here because you can also farm lots of common cards that can be used for leveling up your main monster cards.

- Level up the "Fractured Guardians" to Lvl 15 (maxed) then evolve them before feeding them to your main cards, no need to max their Lvls after evolving.

- Draw and try your luck, hopefully you'll get more beast cards, they are quite common anyway. Draw from Diamond Seal if the attribute of your choice has higher chance this week. If you need more or better beasts, try to farm some of them, drops are somewhat low but still possible to farm.
- Tower of Saviors: All Farmable Monster Cards and Their Drop Locations
- Try to replace all of your werewolves as you go on with the recommended Core beasts here: Tower of Saviors: One Good Way to Start a Beast Team for Free Users - Walkthrough Guide, especially GSoF.

- Learn New Amelioration Skills!
- Another kind of leveling up, but this time you will use Souls (dropped or by discarding rare cards). Amelioration is only available for maxed leveled and fully evolved monster cards.
- Fill the Amelioration bar, to enter a series of battle, new skill will be learned upon completion.
- Note: Tap and hold on the monster you are up against to see the requirement. Example: If it says dissolve 9 Dark Runestones, you need to dissolve 9 Dark runestones in 1 turn, no need to stack them close to each other, just dissolve.

Now continue clearing all island regions using the recommended allies above, best if you can use the right attribute for countering the attribute of that island or stage. Once you reach the Fourth Seal stages in the Enochian Tower, use GSoF as your ally, same strategy with Odin.

Unleash the Fourth Seal - Diablo the Lord of Terror
- Instead of attacking you, the enemy will change it's attribute when it's CD becomes 0 every other time.
- Team Leader: Any 250% Beast Attack Leader
- Ally: Great Schema of Fire (or any rarity, with nice CD), but if you have this as your Leader, pick an Ally with 250% Beast Attack instead. If you can find an ally using 6* Idun the Everlasting Priest that has at least 400 recovery stat to do 3,000 Recovery per turn, then this will make things easier.
- Team Members: Any beast cards with good Lvls, preferably the core beasts.

They key here is to track the boss' current attribute, then dissolve the runestones that will counter that attribute, best if you add combos from other runestones as well. Other attributes will only deal 1 damage so keep this in mind.

- Example Strategy: If most of your team is under the Dark attribute, your best shot is to wait until the boss changes to Light attribute, then dissolve Dark runestones + combos to do a massive attack.

Note that this boss will attack every other turn (once in 2 turns), so keep your HP high. Do this until the battle ends. If you don't have any monster with the right attribute to counter attack, either you Heal or dissolve lots of them to get more Heal runestones.

If you reached this point, you are now a full fledged summoner! Congratulations!

From here on, just do level grinding, card collecting, updating your friends list and adding higher level Allies as you go on, plus, visit the "Pit Stop" section above if you need more info on strengthening your team.

The next boss battles would simply require your team ("plus your ally") to have maxed Lvl and Skill Lvl (CD) with some variations or specifics ("Team Leader, Members and Ally"). To cut this short, here are some sample pics and tips at higher level bosses, use them as your basis (see HP bar and sample beasts).

Unleash the Fifth Seal - Nidhogg the Lord of Undead
- This boss is tricky because you need to do massive healing in order to damage it! 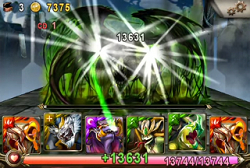 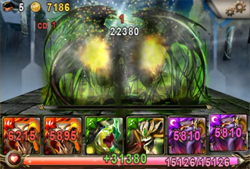 - Quick Note: Get two GSoF beasts as your leader and ally, max Lvl and CD. Add beast cards that can convert runestones to heart, with max Lvl and CDs too.
- It is also possible to use one GSOF as leader or Ally, as long that you have some converters.

Unleash the Sixth Seal - Michael Lucifer
- Honestly, beast team will have a hard time here, but it is still very possible to beat this boss!
- Get beasts that can convert runestones to heart again, like GSoD and GSOF because this boss likes to convert your Heart runestones to Dark, leaving you with zero healing power.

- Michael Lucifer will disrupt your runestones by changing them to another attribute, there is no solid strategy here, just do your best in the battle - Good Luck! 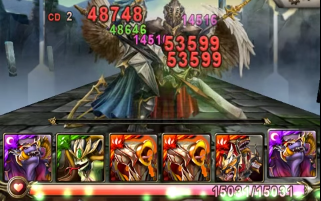 - Optional: In case your team lost, you can use Diamonds to revive your team and continue the battle. There no shame here, even if you use 1 or more Diamonds, you are using a free team anyway, right?, but try to limit it up to 3 Diamonds though.
- After this battle, you'll get 5 Diamonds and a Harpy card!


At this point of the game some players will also switch to Mono Dark team, since it is one of the best teams out there. Try to enter other boss battles or higher zodiac stages for more challenge.