✔ Strife D Leingod Published 1:28 PM
Tags
Ragnarok War of Gods Guides
Here's a stats and skill build for the Thief job class in the MMORPG - Ragnarok: War of Gods. This build will focus on using Daggers as the main weapon, and exclusive skills that will reinforce the weapon.

Dagger Thief Sins can go for DPS builds, Dodger builds, Hybrid builds for better survivability, and even Tank builds! Refer below to learn more about the builds. 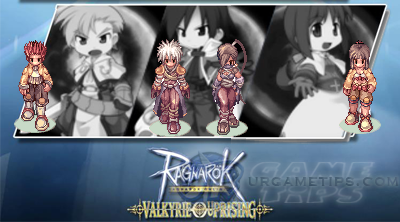 - Example [STR and AGI] Builds:
- [6 STR : 4 AGI] or [7 STR : 3 AGI] Stats Ratio
- Great damage output due to Attack Speed's bonus, but has lower survivability.
Relies on equipments to increase more survivability.
- If you are comfortable with your Attack Speed (at least around 150~200), you
can stop putting more AGI and invest all points to STR. Resume ratio at higher levels if needed.

- Example [STR and VIT] Builds:
- [6 STR : 4 VIT] or [7 STR : 3 VIT] Stats Ratio
- Great damage output and survivability but has low base Attack Speed. 2nd most
common builds so far.
- Relies on skills and equipments for more Attack Speed.
- If you are comfortable with your HP pool's damage intake (around 30~50 VIT) ,
you can stop putting more VIT and invest all points to STR. Resume ratio at higher levels if needed.

- Pure STR Stats Ratio
- A glass cannon build that mainly focuses on high attacks and critical rates. Relies
more heavily on equipments to compensate the lack of survivability and for more Attack Speed.

- Pure AGI Stats Ratio
- Pure Dodger build for players that mainly wants to focus on Flee and ASPD stats.
- Somewhat hard to level up due to low damage output, but it can be compensated
with heavily upgraded high attack Daggers and items with decent Critical Rates and ASPD.
- Can also lure tank due to high Dodge (around 70%+ Flee with Stats/Skill/Cards
and more). Note that 10 AGI = 1 Flee.
- You can also add some STR, VIT, or STR-VIT if you like.

- Pure VIT Stats Ratio
- Interesting tank build that utilizes VIT's Health and damage reduction with good
Dodge Rate!. If you are looking for other tank class to play, try this build.
- Dominates early game, has great survivability but has lower damage output. Highly
dependent to "Party Plays" to boost up level.
- Stats to Focus on: FLEE, MaxHP, DEF, MDEF, and VIT (ignore stats listed
below). Aim for 70+ Flee from Equips and Cards, add some AGI stats if you want.
- Recommended Skills (ignore skill set below): Increased Dodge Lvl 10 and
Envenom Lvl 10. You may also equip any Katar to your quick slot as you alternate weapon, to use Deadly Crossing Lvl 5 and/or Meteor Assault Lvl 10 for debuffs! 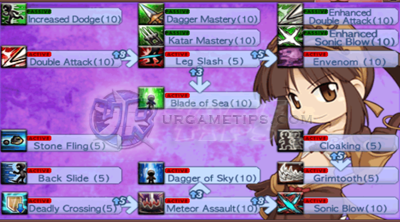 - Increased Dodge Lvl 10 = Increases Flee or Dodge Rate to up to 30%. Get this
first, before Blade of Sea if you need more survivability or if you are using a Pure AGI or VIT build. Some Sins will get this later because of their high ASPD and HP Absorb % weapons.
- Blade of Sea Lvl 10 = Increases Critical Hit Rate to up to 12%. Paired with your
ASPD, this is actually helpful. Get this first, before Increased Dodge if you need more fire power.

More Skills
- Envenom = At Lvl 10, Envenom can deal a one hit 400% damage with a 50%
chance to inflict poison to target dealing 200 damage per second for 11 seconds. Get this skill instead of  Enhanced Double Attack and Blade of Sea above if you are using a Pure VIT build or if you need more damaging skill.
- Enhanced Double Attack = Raises Double Attack's damage to up to 32%.


- Stats to Get from Equips, Cards and Pets -