Plants vs. Zombies 2: It's About Time: How to Defeat the Treasure Yeti

✔ Strife D Leingod Published 8:37 PM
Tags
Android and iOS Game Apps
Plants vs. Zombies 2 Guides
Here's a guide on how to defeat the "Treasure Yeti Zombies" in the action and arcade defense game - Plants vs. Zombies 2: It's About Time!. When a yeti appears on the map, go after him quickly! If you can spot and defeat him in the level, he'll drop fabulous prizes!

The Treasure Yeti is an in-game special event that triggers when a Yeti has been sighted. Yeti sightings are exceptionally rare, but most of the time when players logs into the game, they will get the notification! 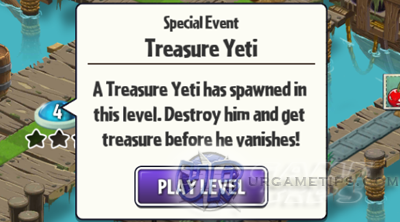 - First, locate the Treasure Yeti zombie, then play the level where it spawned.

Step 2: Before the Battle

- Choose your plants wisely!, refer to the below list of recommended early gamer
non-cash plants:

- Sunflower: Must have to boost your Sun count or economy early game.
- Wall-Nut: For defensive purposes.

- Spikeweed: Best plant for drawing in Yetis into the center of the screen! Refer
below to learn how to use this awesome plant. Make sure to deploy this plant in front of your Wall-Nuts.
- Snapdragons: Powerful short range attacks, this one is good as a crowd controller and a Yeti killer.
- Bonk Choy: Also ok but less better than Snapdragons.

- It's because they don't do long range attacks that will go off the screen, aka projectile attacks. Yetis doesn't like them and will flee once they are attacked by it. The worst part is, if you are using the boost game speed option and using a plant with long projectile attacks, there is a huge chance that you will miss the Yeti.

Step 3: During the Battle

- The Yeti will appear at the latter part of the battle (before the final wave), so use
this time to prepare your traps.

- Make sure that you have at least 2 Snapdragons and 1 Spikeweed per lane to make things easier.
- Defeat all glowing green zombies, collect and fill up your Plant Food bar.
- Here's an example in-game screenshot: 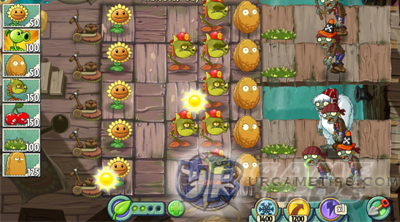 - Wait for the Yeti to appear, but before that, here's some tips about the Yeti.
- You only have a brief amount of time in which to attack him, so make the most

out of it! If you are using the recommended plants above, you should be able to halt his retreat. Yes, the Yeti will start to retreat once he gets a lot of damage from your plants.

- Once the Yeti arrives:
- Quickly use a Plant Food on the Spikeweed (to activate it's effect) to lure-in the
Yeti! If you did this tip successfully, the Yeti is as good as yours. Just activate all Plant Foods you have left to any plants that you like.

- If you have multiple Spikeweeds on a lane, use your Plant Food on the left most
one for better results.
- If you don't have a Spikeweed on the lane where the Yeti appears, just wait for it come closer.

- After defeating the Yeti, it will drop a lunch box that will give random items. 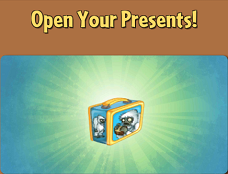 - Other stages will not let you choose your starting plants or will only let you play
mini-games, if this happens, just look around your available plants if they can at least freeze, stun or lure-in the Treasure Yeti. Good Luck!

- If you have a one hit kill plant like Cherry Bomb, Squash, or Jalapeno, things will become easier.
- For beginners turn off the Turbo Speed, you might miss the Yeti if it is turned on!