✔ Strife D Leingod Published 3:24 AM
Tags
Tekken Card Tournament Guides
This Kazuya deck build will focus on using his powerful hits and impressive effects. This is not a heavy hitter build so expect a decent drawing speed and hit penetrations with this deck!

His special skill is to increase his strength when injured, which means the more he loses HP, the more powerful he becomes. This can make for extremely tense fights that hardcore players will love. 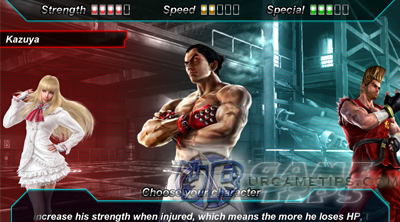 - First, Buy 3 Common Kazuya Power cards
then upgrade to get it's Uncommon version.
Always remember to use Fusion! to save Gold.

Deck Summary:
- Has both powerful hits and impressive effects.
- Oni Stomp to survive the battle.
- Decent drawing speed, much better when you have lower HP.
- Can penetrate your opponent's defenses!

Notable Battle Strategies:
- Kazuya doesn't have a wide selection of cards that can deal over 30 pure damage
so it's better to mix it up with some draw cards.

- Oni Stomp has a very low Hit value but it can help you win a lot of battles because
of it's high Protection! Works well together with "BLOCK" action.

- Kumo Kiri is also a nice trap card, specially when your opponent doesn't have any
cards in play. Just use "FOCUS" even if you have 5 cards in play to activate the effect. Do not overdo it though because your opponent might deal a "Focus Break" on you!