Tower of Saviors: Move Set Strategies and How to Stack and Get Enchanted Runestones

Every move of a runstone is counted as one turn. In each turn, you can move the runestone all around to form the maximum number of combos for greater attack, refer below for more info. 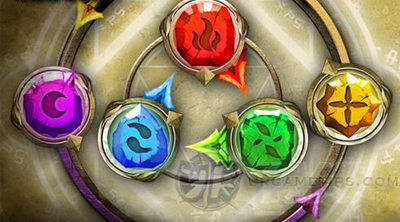 - Attacking and Healing with Runestones -

Dissolving Heart runestones will let you heal, the amount depends on your team's Recovery stat.

Single Attacks
- Dissolve at least 3 of the same attribute to deal a single attack to an enemy.
- Dissolving 4 runestones will deal more damage and can be enhanced by creating combos.

Multiple Attacks
- Dissolve 5 or more of the same attribute to deal damage to all enemies.
- See how to create Enchanted Runsestones below for more info on how to stack 5 or more runestones.

- Aside from the combos and multi-stacking above, you can further increase your damage by following the strengths and weaknesses of the attributes, refer to the pic above.

Targeting
- Tap on the monster you prefer to attack first, second, or last, use is wisely especially for boss battles.

- Monsters with a "Skull Icon" beside them, means that the game will be over once they successfully hit you, avoid getting hit by them by targeting them first.

The "Suggested Path" Option
- At the beginning of the game, the game will offer you this feature where the AI will suggest nice paths that you could take to dissolve runestones, my suggestion is, use this as a guide early game but don't rely on it too much, remove it later on to enhance and practice your own moves.

- The "Suggested Path" option is a nice feature for beginners to learn some basic moves and combos, but it will not teach you how to dissolve 5 or more runestones or when to heal.

Diagonal Switch
- You can move diagonally to switch 2 runestones, it's kinda tricky but if you are accurate enough, it's possible. I suggest you use this method as a "last second move" because sometimes if you can't do it right the first time, it might take some seconds away from your timer.
- Practice and use it at your own risk, for me it's really quite useful.

The Basics
- The best and simple strategy that I can give you is this:

- Just keep in mind this figure ("half plus" sign) while playing, and it would simply improve your stacking ability and style, you'll see. The figure is simple, move from the sides, then exit through the center to create straight lines of runestones.
- Here are some tips that you can do with it.

- Useful for stacking 3 runestones, this is to show players where to enter and exit.


- How to Create Enchanted Runestones -

The game clearly said that dissolving 5 or more runestones will generate an Enchanted Runestone, these powerful runestones are much powerful than the usual ones when dissolved, and are required for certain stages like the battle vs Odin.

Here are the possible formations that you can make aside from the diagonal and vertical ones. Both are sometimes harder, too long, and time consuming to form so it's better to consider the below ones too. 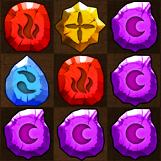 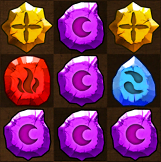 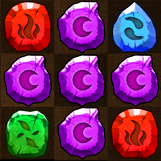 Other Figures That Can Also Create Enchanted Runestones: