✔ Strife D Leingod Published 1:20 PM
Tags
Tower of Saviors Guide
Here's a guide on how to reset the game to re-roll the first seal card, in the Action RPG puzzle card game - Tower of Saviors, available on Android Google Play and iOS App Store (mobile devices). The first seal card is maybe the most important card draw that you will make in this game, because from here you will be able to control the path of your gameplay. 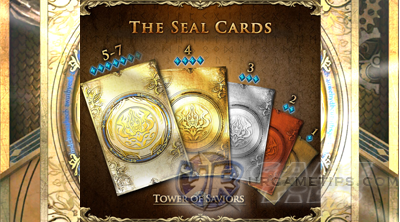 - How to Reset and Re-Roll the First Seal Card -

Step #1: Log-In and Follow All Tutorials
- Login to Tower of Saviors using a guest account, pick "Start Now".
- Enter your Name and choose your starting Character. I recommend Molly or Duncan because you can get a Paladin (7th day log-in reward) based on the attribute of your starting character. Water Paladin is a great defensive team member while Earth paladin is a nice Team Leader, your choice.

- Follow Glauox's tutorials. The Basics, Team Management, Leveling Up and Evolving Characters, until it will lead you to summoning your first Seal Card.

Step #3 Re-Rolling
- Exit the game, and do the following methods, depends on your device.

- Android Users
- No need to uninstall the game, simply go to your device's Apps section, find the ToS App, then select the "Clear Data" option. Go back then launch the game to play from the start.

- iOS Users
- Delete the game and re-install the game... or cut the ToS save file from your phone, using a PC and the software "iFunbox" or "iTools", this way uninstalling the game isn't necessary. To access your save file, go to Libary/Preferences/com.madhead.tos.en.plist.

Why Do Re-Rolls?
- Simply to get an awesome card at the start of the game, or to control the path of your gameplay or team based from the card you drew.

- If you use a cool card as your shared Ally, you'll get lots of friend requests. If accepted friends will use your card as their Ally, you'll get more "friend points" to use to draw more free cards in the "Friend Point Seal". Plus, it is also most likely that they will provide a nice "Ally" card for your team.

Step #4 Farmable Cards
- If you're lucky enough to pull a 5* Platinum Card, good but wait, you might want to check first if the card you drew is a "farmable card". Farmable cards are cards that can be obtained from regular battles, or cards that monsters will drop when the monster is farmed. Sorry, but I suggest, you re-roll...

- Other Notes:
- Golems and Metallic Beasts: A lot of  players doesn't like to keep them due to various reasons.
- Main Characters and Paladins are farmable cards but not available in Diamond Seal draws.
- 6* cards are really rare to get, keep by binding it to one of your FB accounts.

- For Free users ("F2P"), I recommend you start with farmable cards. See below section for more info on recommended drawing methods and teams for free users. This method is more useful for players shooting for certain 5* or higher cards.

Step #5 Binding Accounts (optional)
- If you like the card, bind your game to one of your Facebook accounts (tap on the Cogwheels > Account Binding) to save it, this is if you want to continue doing re-rolls for other reasons like getting your specific starter card.

How to Switch to Other Facebook Accounts?
- Simply clear your current save data (refer to Step #3) then login to the game, but this time use the Facebook Login option. 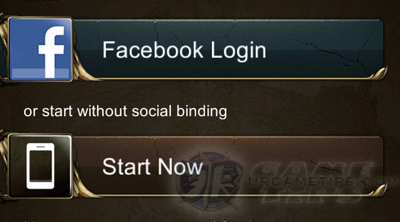 Since only 1 card cannot form a great team, a lot of semi-diamond players or free users (F2P) are doing this method. Note that this one is more recommended for experienced and serious team builders, but not for players who doesn't have spare time.

Getting More Cards Before Real Gameplay!
- Save your 5* or 6* cards to as many accounts that you can, then login all or some of them to collect free daily Diamond rewards, First Seal Diamonds, Instant Battles, Event based and more.

- Gather Diamonds until you have the amount you want then use them all up, maybe according to the cards you need, or based from your preferred first card. Example: If your first seal card is a dark attributed card, wait for the specific Seal Card Event: "Higher % chance to get Dark cards" to draw more dark cards for a nice Dark mono deck.

- Gather Diamonds, draw more 5* or higher cards, then see what team you can make out of them. Well, you get the idea, it's actually great, it's just that you'll spend more time (yup, maybe weeks!), and lady luck would still play it's role, so you need multiple accounts for this method.

- For more info on how to farm Diamonds, go here: Tower of Saviors: How to Farm or Get Free Diamonds - Early Game Farming Guide

Just Out of Curiosity, What is the Best Dream Card to Draw So Far?

A lot of cards are powerful enough to be included to player wishlists, it's just that this specific 6* card in my opinion is more like an all-rounder (useful to many situations) card for me and for a lot of players for sure.

- Your cards will be based from teams that are farmable, thus easy to build, simple to play, and perfect for beginners, especially free users.

Welcome to The Beast Team!
- I highly recommend the Beast Team as your main team. Easier to form with many combinations, great late game cards for other teams you might want to build, and also a  seal breaker, yup it's possible to break all seals including Nidhogg (where a lot of players get stuck here) and Michael Lucifer, if you are lucky enough to get more and better beast cards.
- They are popular for free users, meaning - you'll get lots of powerful beast Allies to help you out.

- Popular starter Leaders for Beast teams because of their offensive capabilities (Beast Attack x %).
- Players prefer GSoD though, a power house card and useful for other team builds like Dark Mono. GSoL is also a good alternative if you don't have GSoD yet, and Might King/KDB is a great card for Beasts, Elves, or Earth Mono teams.

Notes:
- Use any beasts you want as team members, as long as GSoD/L and/or MK/KDB is leader and/or ally.
- Great Schema of Fire and Earth are also a must have defensive cards, get them later.
- Great Schema of Aqua is a dragon card.

- Mainly to give you a wider selection of starter Beast cards.

More Possible Beast Starters
- Yup, they are very playable, just always add/pick offensive Beast allies (above cards) to always get attack boosts, but once you obtain at least GSoD or GSoL, your team will become much better since you already have a nice team member, but what is so great about these cards as a starter?

- Mainly because they are only obtainable via Diamond Seals, unlike the Great Schema Beasts above that are farmable. The point is, it is also a good idea to get a starter Diamond only beast card then farm Chinese Beasts later. Yes, it will be harder early game, but at least you already have one helpful "Diamond only" beast card once you get GSoD or GSoL (must get asap though).

Mythical Beasts (Converters)
- Converters are cards that can switch certain type/s of Runestones into another type/s. Useful to create combos and damage bursts, you'll need all of them for your Beast team too.

Baphomet, Medusa Fatale, Underworld Cerberus, or Griffin King
- They are also useful for boss fights and for other team builds as team members, especially Baphomet. This method might require some experience playing the game though, either stick with beasts (ex: A Wolf or any Beast as Leader), or go mono color beasts (ex: A Mythical Beast as Leader) until you get GSoD or GSoL (get asap!), but both must still rely on offensive beasts as allies.
- For Cthulhu, also a Mythical Beast, I suggest you get this later, the above ones are more important.

- Now that you know which Beast cards are good in terms of damage, support, and rarity (Diamond only), it's time to do trial and errors. Like what I said above, 1 card cannot form a great team, so the best way for a free user to get some nice team cards early game is to do the hard way.
- Yup, it's what free users need to pay to become stronger in any game - "time" and "patience".

Other Than the Beast Team, Are There Any "Farmable" Teams I Can Start With?
- Main Characters (starters), Moirai Sisters (aka Fate Sisters), Paladins, and Defensive Dragons
- All of them can be farmed from regular battles, and also obtainable from Friend Point Seal. The drop percentage is really low so try to farm them during "Seal Drop % Increase" or "-50% Stamina". Higher stages tends to drop better.

- I suggest that you focus on Beasts and use the above cards as your side decks or cards, just keep and Lvl them up if you want. Notable cards are Urd, one of the Moirai Sisters - useful active skill, and Paladin King of Earth - nice team leader.

- Personally, and based from other players' preferences, the Beast cards are still better overall, in terms on how far you can get into the game using farmable cards, Beasts are your best shot (late game full beast, hybrid, or mono).

I Heard Paladin King of the Earth is Also a Good F2P Starter?
- Yes, but I won't count PKoE as a starter because Paladins are no longer available in the Diamond Seal.
- You can get a free Earth paladin as your 7th day log-in reward if you chose Duncan as your starting card. Paladins are great but again, it is still better to keep them as your side deck team.

Any Rare Cards We Can Get From the Friend Point Seal?
- The best cards ("for team") that we can get are still the farmable cards mentioned above.
- Others are just common monster cards, nice Elements, and more. Hopefully they will add more soon.

How About the Other Seals?
- There are also some limited-time "Event Seals" where we can draw cards from, but they are more recommended for advanced players with better cards. Start with the default "Diamond Seal" if you are a beginner using farmable cards as main teams.
- If you really want to start a card under this Seal, here's a tip: Before you spend your first 5 Diamonds, exit the game, then login to draw a card from that "Event Seal".